With one week passing from the end of the crew changeover to MDRS 90, and six days passing from landing back in Michigan, I felt it fitting to take an inventory of my life at this point to quell my Mars withdrawals. It’s been a tough first week back on Earth, especially school-wise, but I think that I’m finally starting to come back around to normalcy.

Life at State
Waking up in the morning for classes instead of EVAs still feels a little off, but thankfully my sleep regiment imposed by MDRS has helped out, with the exception of my late sleep-in today. While yes, it didn’t help out waking up at 0730 on Tuesdays to teach, every other day of the week is fine. I’m also a little quicker to get up in the morning too, making it more likely to stay awake once I am up. I’m also back to eating real food every day (not just every other), although we do need to go grocery shopping soon to replenish our stores. I’ve yet to clean my room from before I left for Mars, but I may have time today or tomorrow to take a stab at finishing that up. I haven’t slept in the sleeping bag since I returned, since I don’t want to take it out of the sack.

The actual classwork has been fine. I had two exams this week and a paper due, with my final exam for this season falling on next Friday. I didn’t do too well on the two exams, but I did get a 4-point on the paper, which is great! I attended two labs last week, and will have two this week as well, to make up for missing the first two labs for my electronics class, but after that things will be back to normal for even that. The fact that I’m back to doing homework every day instead of riding ATVs is a little depressing, but I’m used to the fact that I’ll be doing homework for quite a few more years anyway…

Since I am now twenty-one after having one of the best birthdays possible, a lot of different opportunities are present for me on the weekends. Last night, I hung out at the bar with my roommate and a few of our good friends, and it was great! The place wasn’t packed, there was no line to get in, and I genuinely enjoyed myself. I also woke up this morning to an e-mail from Carla to check my mail, and I was greeted with a sweet NASA sweatshirt, some freeze-dried ice cream, a lanyard, and a postcard, which, combined with everything I got from her while on Mars, makes for a huge birthday stash of gifts and delicious treats. Honestly, I wasn’t expecting a single thing, so she could have given me a piece of paper with NASA scribbled on it and I’d still be ecstatic. I also got a good “birthday gift” from The State News by appearing on the front page of the paper, plus a multi-media spot on the website. All very cool. 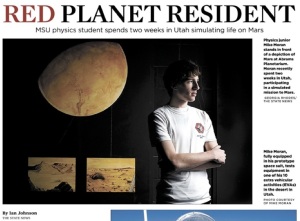 Since I’ve already mentioned The State News article (you can read it here), I might as well discuss the media coverage that has surrounded my return to Earth. Our crew blog has a list of all of the news coverage we’ve received, as of February 12, which you can browse here and includes all the articles that I’m going to talk about now anyway. My hometown paper, the Birmingham Eccentric gave me the front page as well, on their Sunday paper for February 7, which coincided with me returning to Michigan post mission. Both of those articles had secondary information: the multi-media spot for my college paper, and a quote on my thoughts on the existence of life on other planets for my home paper. I will also have a similar article in the February Lyman Biggs newsletter, but since that hasn’t come out yet I can’t really link to it… While I am slightly surprised about the amount of coverage that we as a crew and me personally have received, that might just be because I had seen no coverage of any of the previous crews. I only recently found out that some footage for an episode of The History Channel’s The Universe (which I own the first three seasons) was filmed at MDRS, since I hadn’t watched that particular episode before. At the same time, it makes sense, since I’m almost positive that I’m the first State student (and greater Birmingham area resident) to take part in the program. Also, as a result of having the photo shoot at the Abrams Planetarium, I may be giving a talk there about my experiences sometime this semester. I also have an entire Google page devoted to me (just search “mike moran mars”)!

Work
I am back to being a Calculus II LA for the semester. I love the job, but it will be strange once more standing in front of a class once a week and grading their exams and quizzes. I’ve also recently (i.e. yesterday) interviewed for a math tutoring position for the RCAH, just to get some more money during the semester and some more job experience. I should hear back early next week about whether or not I got the job, but not to jinx myself, but I think that I’ll get the job based on the final questions he was asking. Should be pretty sweet. I’ve also, strangely, been accepted for a position as a Physics LA for next year, which is strange considering the fact that I have already accepted (I think…?) a position as a Calculus LA for next year. The past two years, I was denied being a Physics LA since I was also a Calculus LA, so either they changed their minds, saw the paper and said, “oh shit, we need this guy to teach for us,” or didn’t realize that I’m still a Calc LA. Or I could have not accepted the Calc position yet… I’ll find out when I get the official statement of employment, which the professors said should be coming shortly, and stopping in the office to check things out.

I’ve also applied for some summer internships: REUs at the University of California, Davis campus, and Notre Dame, and the NASA USRP. Depending on which one I’m accepted to (if any), and where NASA places me, I’ll be spending my summer in California, Texas, Indiana, or Maryland. Any of those would be nice places to be for two months, and I should be hearing back about those within the next few months. I’ve also looked at the Caltech/JPL SURF program, but with a deadline of this Friday and all of the other work I need to get done, I may not have the time to complete the thorough application and round up a third reference, since the internships I’ve already applied to only required two (or one).

So, I have a lot going on still. I spent today in the shower, at a Chinese food restaurant, in my bed, watching TV and reading TIME, eating freeze-dried ice cream, and putting off studying and working on homework for as long as I can. Once this goes out, though, I’m actually going to clean my room to facilitate the homework aspect of my plans.

This entry was posted in Life, MDRS, School, Work. Bookmark the permalink.