And a full day it was! The morning started off with a bacon, egg, and cheese breakfast dish which I happily ate, followed by Brian and I driving out to Hanksville in our pressurized rover to pick up Amnon Govrin and his twin sons. He has recently become very interested in space exploration, as his blog shows, and he and Brian have had an internet correspondence for a little while. He asked to come visit the Hab to see what it was like, so we agreed that he should come on our last day before the crew change-over, which is happening tomorrow. So, we drove back out to the Bull Mountain Market to pick them up, since his Prius would not have handled Lowell Highway well. We drove back to the Hab, while he asked questions and we gave him a brief overview of what we’ve done, and parked in the pressurized rover bay.

As I was to head out on the day’s first EVA with Kiri and Darrel, mirroring our EVA 2 team, but this time headed toward Valles Marineris, since we had already hit the other major martian landmark, Olympus Mons, quite a few times before. We got dressed, showing the process to Amnon and his kids (which was easier for me, since I already had my flight suit on from when we picked them up), and stepped into the airlock. During the five-minutes depressurization, we suggested that they go out to the pressurized tunnel to watch us head out. We divvied out the keys, with Viking I firmly in my possession, and exited out onto the martian surface for the last time in sim. 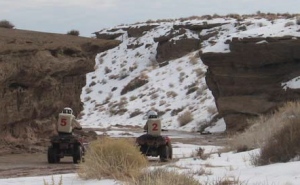 Because of the hectic nature of the morning, the ATVs had not been warmed up prior to our departure. Viking I took a while to warm up, and start, but once it was working and howling we were off. Kiri, as EVA commander, led us back toward the turnoff to Cactus Road, which we had been unable to find during EVA 16. Based on observations from Crew 88, which we received yesterday, we found out that we had been at the turnoff to Cactus Road, but had not recognized it for what it was, since it simply looked like a stream bed. Kiri led the way down the path, with Darrel bringing up the rear, as we made our way toward Valles Marineris.

While driving down the newly discovered road, we actually found ourselves right next to Valles Marineris without even realizing it. Instead of trying to figure out exactly how to get there, we drove on down the road to see what else we could visit, since we had only been out for not even half an hour at this point and were only a short drive from the Hab. So, we drove further down the road, toward Candor Chasm, trying to find a cool place to stop. Eventually, we turned around and started heading back, at which point we decided to climb up a large outcrop (later identified as Mount Sagewood) due to the presence of some interesting geological formations. We climbed up, but then decided that going to a particular part of the face wasn’t good enough, so we went all the way to the top.

It reminded me of our trek up Olympus Mons (back on Sol 8 for a number of reasons: I was with Darrel and Kiri, we climbed a large outcrop, we took a ton of pictures, we could see the Hab from where we were, and it was fun! The view might have been even better than from Olympus due to the presence of some large canyons that we could easily see from our perch. Plus, the sun was cooperating with us much more, so the colors really popped out, even through the scratched and dirty visors. Once our jaws returned to their normal positions, we started to climb back down, but instead went down a different path that looked to be much easier than the one we came up.

Once all six of our feet were back on level ground (with only a few slips along the way), we remounted our rovers, and I led us back to the Hab. Similar to the two other times I’ve done this, I felt great! Viking I just flew over the broken ground, and at one point actually flew when I hit a jump, and it felt even better than earlier in the mission. I periodically checked to make sure that Kiri and Darrel (who was filming the return) were still behind me, but otherwise just looked at the road ahead and drove the ATV back to the Hab. When we returned, Amnon and his kids were still there, so they watched our muddy rovers (and bodies) return to the Hab following our successful EVA 19, the second-to-last of the mission.

We left the rover keys in and re-entered the airlock, celebrating and congratulating each other on a great mission. Once the airlock was pressurized, we walked into the EVA Prep Room to start removing our dirt-covered suits and helmets. It was a great end of my ten EVA career (tied for second in the crew), plus really enjoyed myself. After we desuited, Darrel and I drove Amnon and his kids back to their car at the Bull Mountain Market (where we had picked up the food), and I drove back to the Hab. It was nice driving an actual car/pressurized rover for once, although the ATVs were possibly the best part of the mission dynamics.

After checking and refilling the oil, we returned to the Hab to find Brian, Carla, and Luís already suiting up for their last EVA of the mission. I helped them into their backpacks and helmets, inclusive of bungee cords, and saw them on their way. Once they were clear of the Hab, the three of us remaining went to work cleaning up the living quarters (and Darrel worked in the Green Hab) to prepare for the crew changeover tomorrow. MDRS 90 is the first all-Belgian crew, and I am very excited to meet them tomorrow around noon. We’ll be eating lunch with them before leaving, so that will be nice to pass off the information from one crew to the next.

The EVA team returned, we helped them get out of their suits, and we sat down to write reports before eating dinner. We had chili with cheese, but unfortunately it ran out before I could get seconds. Deciding to eat through some of our leftovers, I heated up a bowl of some sort of Alpineaire meal, but it did not taste good at all, so I decided not to eat any of it. I did, however, eat two pieces of birthday-reprise cake after blowing out the remaining three candles. After filing out my food questionnaire, and realizing that I’ve lost ten pounds in two weeks, I decided to eat two more pieces of chocolate cake while waiting for the rest of the crew to get ready for a last game of MDRS Clue, and our last night in the Hab.

Since today was hectic, plus I haven’t downloaded all of the pictures yet, not many pictures for this post. Since this will be my last post from the surface of Mars, I will see everyone back on Earth within the next few days!