Since we all had a late night, playing Guesstures and working on some of our research projects (and me not working on homework…), Brian said that we didn’t need to start until 0900 this morning, which I was very thankful for. I reset my alarm, fell asleep, and slept. I did not want to get up in the morning, and when my alarm went off I seriously contemplated just rolling back over in my sleeping bag and not getting out of bed. But, I did get up almost right away, because there was the lure of having bacon with breakfast to get me up and dressed. Carla had cooked an amazing egg, cheese, and bacon casserole, which I happily ate and enjoyed. This was probably my best breakfast on Mars to date, and like basically everything else she’s cooked, I need to make sure I get the recipe before heading back to State. 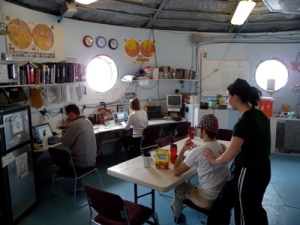 The crew and I did, however, wake up to an e-mail from Artemis, the mission director for MDRS, discussing some of the choices we have made as a crew over the last few days, specifically our EVAs in snowy conditions and the construction of the sled. She and James Harris said that the sled was a waste of Hab resources, while the EVAs are unsafe and should not be undertaken in white-out conditions. Of course, we still had visibility of at least a kilometer, and the sled can be easily de-constructed (and was made out of a small segment of the copious panelling and tubing near the generator), so I think they were more angry that we didn’t check with them beforehand. Doesn’t matter, because it’s in the past now (and didn’t really affect me, really…).

The first thing I did, however, when I got out of bed, was shut down Audacity and the radio telescope, since it had been collecting data for close to eight hours throughout the night. Unfortunately, the entire recording session simply returned background static, so I didn’t get anything out of it. I’m going to try another set of programs tonight, as well as download the audio analysis programs that I forgot to last night, to see if I can find a better way to collect and access the data. It’s a really finicky system, but even more so because most of the programs (including the go-to, Radio-SkyPipe) are Windows only. I’ve been working on work-arounds, from trying to installing Windows XP as a virtual machine (failed due to the lack of a product key), trying three or four different emulators (all failed to load a few crucial subcomponents), and working off the Hab webcam computer (connection to radio telescope failed). I’m thinking about observing both the Sun and the two jovians, just to try to get some data over the next week. Maybe a higher-class solar flare will pop up… 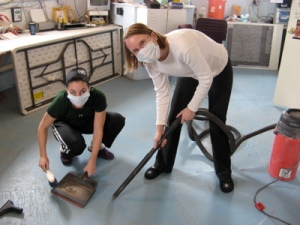 After fussing with the computer for a while, and listening to the background static for around twenty minutes, I moved into my state room due to the mopping and sweeping that was to occur in our main living quarters. Since the rooms don’t have any seating at all, and if they did my desk was still covered with the entirety of my backpack’s contents, I crawled up into my bed and lied down, still with my headphones in.

I think it’s the repetitive monotone nature of the background static that caused me to fall asleep. I wasn’t even tired, especially considering that I had only woken up no less than two hours prior, but I fell asleep. I didn’t dream, and I didn’t stir at all, maybe also due to the background static. I think some of my crewmates came in to wake me, since they were mopping the floors and needed access to mine, but I may have just imagined that. It’s hard to tell exactly what happened, similar to me telling Greg to “stop showing off” when I was sleeping on the futon last year. Long story, but he was sitting at his desk talking on the phone.

I did eventually wake up when water started pouring on my lower back. My state room is right below our internal water tank, the tank we use to get drinking and bathing water. Every day, we pump water from our external water tank (which sometimes has to be re-filled from our portable water tank, which is really only portable via truck) into our internal tank so that we actually have water. It’s marked off on the side in non-sensical measurements, with six-nine-twelve being the main delineations. There are also two other marks: don’t go below, being below six, and don’t fill above, being above twelve. Usually we fill it up to the twelve line at least once a day, but sometimes twice. Today, due to the cleaning procedures having a monopoly on the rest of the crew’s minds, they didn’t realize that our water pumping had gone past twelve and was approaching the don’t fill above line.

I noticed when water started dripping from the ceiling. I quickly got up, put my computer on my desk and pulled my sleeping bag off, then threw my towel on the mattress pads to start soaking up the water. Thankfully, the rest of the crew noticed at basically the same time, prompting them to open up all of the taps and shut down the water pump to return our tank to normal levels. Once the water situation was in order, we sat down and had lunch. We had clam-less chowder plus some baked bread, both of which tasted great. It will be tough for me to adjust back to my old eating habits and schedules, as I mentioned today at dinner, since I’m being spoiled with great cooking. 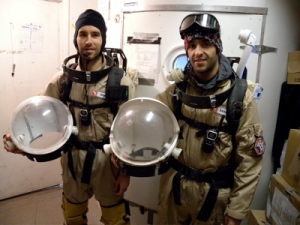 Since we didn’t really have anything planned for the day, I tried figuring out how to get a better analysis program for the radio telescope without having to download anything, which I already mentioned. Brian and Luís went out on a biology/geophysics EVA, taking the ATVs up to Radio Ridge Road, while I helped Darrel finish repairs on the Hab’s shower. It was very much a flash-back to my Jewelry class in high school, since we filed, cleaned, fluxed, soldered, and a bunch of other techniques that I had learned. Of course, since this was just copper pipes that no one will look at unless they’re fixing it, we didn’t really include the cosmetics that I was used to. I did get to get away from my computer, which was pretty nice. 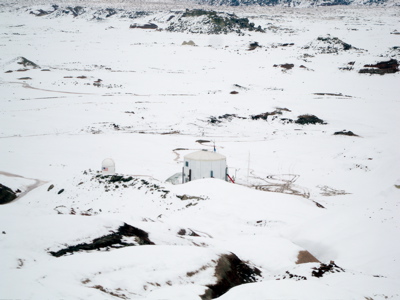 After, while waiting for dinner, Kiri walked me through the Python work she was doing for her photograph auto-geolocation project. I didn’t understand half of the things she was trying to do, I think because most of it wasn’t even really Python, but she explained it so that I could understand it. We ended up discussing it over dinner, prompting a pretty long discussion of it and similar ideas by her, Brian, and Darrel, while I listened attentively and Luís and Carla tried not to fall asleep from boredom. The dinner was delicious too, with Darrel cooking corned beef with homemade BBQ sauce. I was completely surprised that the sauce actually tasted like BBQ sauce, especially due to the fact that the Hab has almost no food. Carla cooked yet another cake, this time with almost no sugar along with the no eggs, milk, flour, and every other necessary ingredient for baking.

After, we tried to figure out what to do over the next few days, especially since the snow will probably be here for a while, and Kiri and I took showers at separate times, since obviously my old statement was too ambiguous. When I left for MDRS, I hadn’t planned on taking a real shower for two weeks, since the shower had been broken for three or more weeks prior to the start of our rotation, so I only brought one towel and two sticks of deodorant. We do have to use Oasis soap, which is biodegradable and is the same stuff we use for our dishes, but it works fine enough. I feel clean, plus it’s the only time I can look in a mirror and check out my growing facial hair (Greg would be so proud).

It’s strange to think that, seven days from now, I’ll be asleep in a hotel waiting for my alarm to go off for my flights back to Michigan. I can’t really imagine going back to school, to classes and homework and not living in a Hab and walking outside without standing in the doorway for five minutes and everything else associated with MDRS. This place really grew on me, making me even more thankful that I was selected for this mission.